The Dazzling World of Greek Mythology 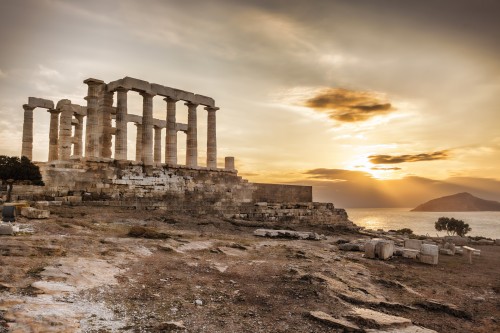 “Zeus, first cause, prime mover; for what thing without Zeus is done among mortals?”
– Aeschylus

Imagine being condemned to the back-breaking labour and daily tedium of continually rolling a boulder up a hill, to having your liver pecked at endlessly by a giant eagle, or to seeing the future with no-one believing you. Conceive of a place where three-headed dogs, 100-eyed giants and winged horses stalked the land. Envisage gods ordering floods which drown planets and sending lightning bolts flying from the tips of their fingers. Think of the weirdest and most wonderful punishments, creations and powers you can, and chances are they have been pre-empted by the Greeks.

Concocted many thousands of years ago by seers, storytellers and lyricists, the Greek Myths describe a magical realm of warring gods and fantastic origin stories. Theirs is a world of heroic battles, personal tragedies, courageous acts and flawed ambition. Passed down from generation to generation through word of mouth and epic poetry, they contain many of the motifs and narratives upon which contemporary stories rely.

From the gruesome, bull-headed Minotaur to the cruelly enchanting sirens, strange beasts and semi-human creatures abound in these tales, making them a fertile ground for blossoming imaginations. Replete with fanciful explanations of the existence of seasons, the discovery of fire and the emergence of the human race, they provide a brilliant starting point for writers to compose creative pieces which interrogate the world around them.

Over ten weeks this summer, we’ll be inviting our own young writers to construct their unique versions of a Greek Myth. Learning about and working with all the mythical materials the ancient Hellenic world has put at our disposal, they will answer the call of the nine muses to craft a story which is not only imaginative, invigorating and inimitable, but also deeply enmeshed in an important historical and cultural context. Will their heroes fly like Daedalus and Icarus, or will they open Pandora’s Box? Will they emerge from the underworld like Penelope, or will their ill-fated protagonists suffer the painful fate of Prometheus?

Tailored to the individual needs, interests and skillset of each young writer, this course will introduce the dazzling world of Greek Mythology to children in Years 3, 4 and 5 and will present a one-of-a-kind chance to spend the summer term working on a wondrous tale of heroism and magic.