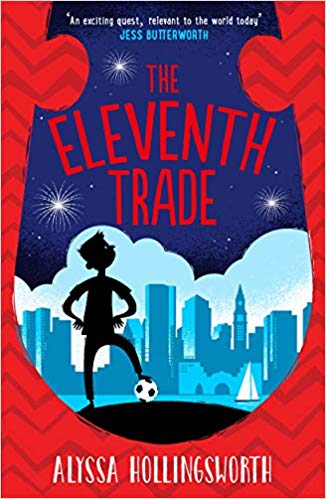 Read & Quiz is a series of the Chelsea Young Writers book reviews & comprehension quiz competitions. Young readers are invited to enter a monthly quiz competition by reflecting on the books they’ve read and sending their full answers to the comprehension questions to Chelsea Young Writers. The winner receives a certificate award & an Amazon voucher worth £10!

Back in Afghanistan, Sami’s grandfather was a famous musician. Even now in Boston, the sound of his instrument, the rebab, is the sound of home. Then the rebab is stolen and appears in a shop for $700. Sami has no money and nothing to sell. What he does have is something to trade. But there are two sides to every bargain, and Sami’s chance of success depends on the very last thing he wants– help.

The Eleventh Trade is the tale of Sami, a football-mad, Afghan refugee in Boston, America. The rebab, the traditional Afghan instrument, is Sami and his grandfathers’ only source of livelihood. When the rebab is stolen and appears in a shop, Sami must find a way to get it back, even if it means trading everything he has.

When his Baba takes a poorly-paid job washing dishes, Sami begins exchanging items with his peers at his new school. He trades his precious Manchester United keyring for a broken iPod, the iPod for some figurines… His goal is simple: if he can raise enough money to buy the rebab back, he’ll be able to gift it to Baba for Eid al-Fitr, the celebration of the end of Ramadan.

Along the way, Sami must learn to trust his new friends and face up to the traumatic memories of war and displacement that haunt him. This is a painfully beautiful story that reveals the truths of the refugee crisis and paints Islam and the Afghan culture in a positive and informative light. It’s skilfully written with an authentic portrayal of Afghanistan’s vibrant culture (experienced first-hand by the author), post-traumatic stress disorder and the ways in which diverse cultures can come together as one.

Sami is a kind, relatable character whose story gives the reader an insight into the lives of today’s refugee children, and the secondary characters in the novel set an example of what it means to be welcoming of others.

Aimed at readers age 8 to 14, this irresistible adventure promotes acceptance and tolerance and reminds us of the priceless value of friendship.

“I flick my fingers over the rebab’s three main strings. The mulberry-wood base presses into my chest. One aid worker called it “boat shaped”. It’s deep enough that I have to wrap my right arm all the way around to reach the strings. The old goatskin covering the sound box still has a cream color at the center, but fades to a blotched brown on the edges and under the place I rest my fingers. Where the skin meets the wooden neck, mother-of-pearl inlays flash white, blue, green, and pink in the dim subway light. The pegbox at the end of the neck is carved in a flower design, with one end chipped from where Baba dropped it in Iran. The tassel—woven by my grandmother in blue and white string with red beads—swings as I adjust the rebab in my lap.”

Submit your full answers to [email protected] by 31 December 2018. The December Winner to be announced in early January 2019. Entrance age: 8-14 Yrs, state your age when contacting us.
Back