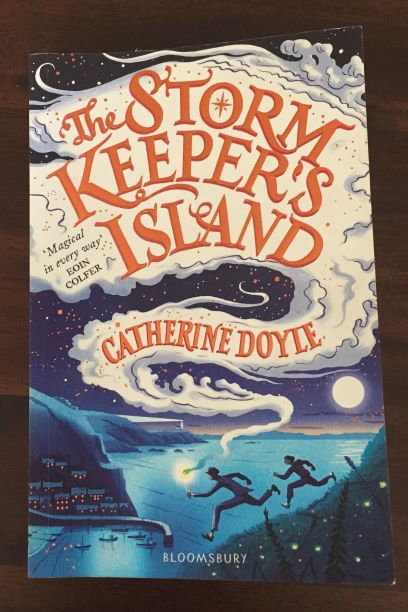 Read & Quiz is a series of the Chelsea Young Writers book reviews & comprehension quiz competitions. Young readers are invited to enter quiz competitions by reflecting on the books they’ve read and sending their full answers to the comprehension questions to Chelsea Young Writers. The winner receives a certificate award & an Amazon voucher worth £10!

Aimed at readers age 8-12 years, this CILIP Carnegie Medal 2019 nominated novel is a magical adventure to be read again and again.

When Fionn Boyle sets foot on Arranmore Island, it begins to stir beneath his feet …
Once in a generation, Arranmore Island chooses a new Storm Keeper to wield its power and keep its magic safe from enemies. The time has come for Fionn’s grandfather, a secretive and eccentric old man, to step down. Soon, a new Keeper will rise.
But, deep underground, someone has been waiting for Fionn. As the battle to become the island’s next champion rages, a more sinister magic is waking up, intent on rekindling an ancient war.
Fionn is heartbroken at being sent off to stay with his grandfather on Arranmore Island, leaving his ill mother behind in Dublin. His sister Tara says the island is magical but for Fionn- who is terrified of water- it’s nothing more than the place where his father was lost at sea.
But as flowers begin disappearing before his eyes, as the ground beneath his feet shifts and the breeze conjures ghosts from the past, Fionn discovers that there is magic on the island after all. And on his grandfather’s mantlepiece, a candle that smells of a sea storm and must never be extinguished…
As Fionn discovers his Grandfather’s role on the island– maker of storms and wielder of an elemental magic that protects the island from a growing evil- his relationship with him blossoms. Malachi shares knowledge and stories about the island and shows Fionn how memories can be preserved inside weather candles. And the question arises: who will be the island’s next storm keeper?
Bartley Beasley- Tara’s crush- is determined that that will be him. And he counts on finding the legendary sea cave and its magic wish to make sure of it. But his vision for the island is more dangerous than he knows, and Fionn is the only one who can stop him from achieving it.
As Fionn fights to protect the island and its ancient traditions, he comes to understand more about his past and the father he never knew. This is rich storytelling, succinctly weaving together a tantalizing plot with an appreciation of wild, natural beauty and some of the most authentic characterisation.
A story about grief, bravery and overcoming our own internal storms, The Storm Keeper’s Island will break your heart and put it back together again. It will have you rooting for Fionn from the very beginning, and blazes the trail for a much awaited sequel.
“‘Nothing on Arranmore is inconsequential. No blade of grass, no drop of rain, no wisp of cloud. There is magic in everything’. He pressed his lips together, like there was a secret underneath his tongue, swelling and swelling, until he chewed it up, and then simply said, ‘There is magic in memory’.”

Submit your full answers to [email protected] by 31 March 2019. The Winner to be announced in early April 2019. Entrance age: 8-12 Yrs, state your age when contacting us.